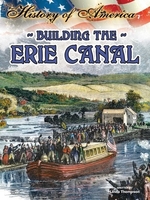 During the eighteenth and early nineteenth centuries a major goal of the United States was to link Lake Erie and the other Great Lakes with the Atlantic Coast through a canal. On July 4, 1817, construction of the Erie Canal began in Rome, New York. The first segment of the canal would proceed east from Rome to the Hudson River. On October 25, 1825, the entire length of the Erie Canal was complete. The Erie Canal cost $7 million dollars to build but increased the shipping of goods and people significantly. This title will allow students to analyze the structure an author uses to organize a text, including how the major sections contribute to the whole and to the development of the ideas.