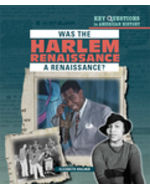 Key Questions in American History: Was the Harlem Renaissance a Renaissance?, 1st Edition