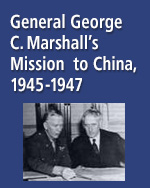 In November 1945, President Truman appointed General George C. Marshall as special envoy to China and instructed him to negotiate a cease-fire agreement between Chiang Kai-shek's Nationalist troops and Chinese Communist forces. Marshall met at length with Chiang, Chou En-lai, and Mao Tse-tung. Although a cease-fire was declared in January 1946, peace negotiations stalled over the question of political unification. Marshall returned to the United States in early 1947 without having reached a solution. This collection comprises the complete records of the Marshall mission and are among the best English-language sources available for studying the Chinese political and military situations following World War II, as well as U.S. policy there. The minutes of Marshall's meetings and reports and memoranda prepared by U.S. advisers are all included. Information on the military front is provided by reports from U.S. observers in the field who investigated cease-fire violations.