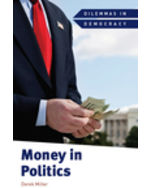 The issue of money looms large in American politics. A series of Supreme Court decisions have cleared the way for corporations and rich donors to pour money into the political system. Proponents of current campaign finance laws argue that it's their right to donate money. Opponents see unlimited corporate money as a threat to democracy itself. This important volume examines the role that money plays in politics and the arguments for and against the status quo.

Front Cover.
Title Page.
Copyright Page.
Contents.
1: The Effects of Money in Politics.
2: Money in American Politics Today.
3: Comparing Democracies Around the World.
4: The Power of the People.
Glossary.
Further Information.
Bibliography.
Index.
About the Author.