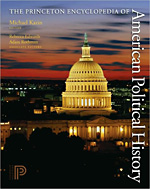 An essential resource for anyone interested in U.S. history and politics, this two volume encyclopedia covers the major forces that have shaped American politics from the founding to today. Broad in scope, the book addresses both the traditional topics of political history (such as eras, institutions, political parties, presidents, and founding documents) and the wider subjects of current scholarship, including military, electoral, and economic events, as well as social movements, popular culture, religion, education, race, gender, and more. Each article, specially commissioned for this book, goes beyond basic facts to provide readers with crucial context, expert analysis, and informed perspectives on the evolution of American politics. Written by more than 170 leading historians and social scientists, The Princeton Encyclopedia of American Political History gives students, scholars, and researchers authoritative introductions to the subject's most important topics and a first step to further research.