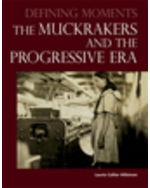 Defining Moments: The Muckrakers and the Progressive Era is divided into three primary sections. The first of these sections, the Narrative Overview, provides a detailed, factual account of the muckraking movement in American journalism and its contribution to turn-of-the-century progressive reforms. It explains the transformation that occurred in the United States as a result of industrialization and traces the origins of the Progressive Era. This section also covers the development of investigative journalism in America and the rise of influential muckraking magazines like McClure’s. It goes on to offer an in-depth look at major muckraking investigations of social problems, government corruption, and corporate influence. Finally, this section explores how the muckraking tradition and progressive political ideas have continued through the modern era.

The second section, Biographies, provides valuable biographical background on leading figures involved in muckraking journalism or the progressive politics of the era. Examples include S.S. McClure, Upton Sinclair, Ida M. Tarbell and Theodore Roosevelt. Each biography concludes with a list of sources for further information on the profiled individual.

The third section, Primary Sources, collects essential and illuminating documents related to muckraking journalism in the Progressive Era and beyond. This diverse collection includes excerpts from How the Other Half Lives, Jacob Riis's groundbreaking 1890 book about the struggles of the urban poor; "The Treason of the Senate", David Graham Phillips's hard-hitting 1906 series on political corruption in the federal government; The Man with the Muck-Rake, President Theodore Roosevelt's famous speech that coined a term for crusading journalists; and "Walter Reed and Beyond," the Washington Post's Pulitzer Prize-winning 2007 report on the mistreatment of wounded veterans at U.S. military hospitals.