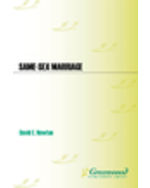 When Washington, DC, began issuing marriage licenses to same-sex couples on March 4, 2010, our nation's capital became the sixth place in the United States to allow same-sex marriage, along with Connecticut, Iowa, Massachusetts, New Hampshire, and Vermont. In the late 2000s, California and Maine had also legalized same-sex marriage, but these statutes were soon voted down by residents of the states.