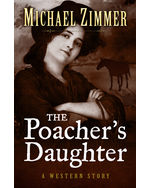 The Poacher’s Daughter is an extraordinary story of betrayal and redemption‚ set within an uncompromising landscape of raw brutality and unimaginable beauty. It is a novel you won’t soon forget.

In 1885‚ young Rose Edwards is widowed by Montana vigilantes who hang her husband for an alleged theft‚ then burn her Yellowstone Valley cabin to the ground as a warning for her and others of her kind to quit the territory. Penniless and illiterate‚ yet fiercely independent‚ Rose begins a two-year odyssey to revisit the land of her childhood‚ a land she once traveled with her father‚ an itinerant robe trader among the Assiniboines and Blackfeet. But the old ways of the hunter and trapper are disappearing as Europeans flood the ranges with vast herds of cattle.

With an aging roan gelding named Albert as her closest friend‚ Rose finds herself a reluctant hero in an ageless battle‚ the face of an indigenous population‚ both native and white‚ as she stubbornly pushes back against the invading aristocracy.