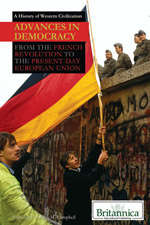 A History of Western Civilization: Advances in Democracy, 1st Edition

Beginning with the Industrial Revolution, Europe was seized by the spirit of political and social innovation and reform that has continued into the 21st century. The general atmosphere of the continent, reflected in the Romantic, Realist, and Modernist movements that swept through its nations, reflected a growing cognizance of previously neglected social realities that demanded action. This engaging volume chronicles Europe's transformations from the late 18th century through the present and examines the European response to both prosperity and war.