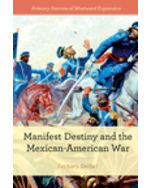 Manifest Destiny the name given in the 1840s to a belief that the coast-to-coast expansion of the United States was both inevitable and justified, regardless of the means. Standing in the way were not only the native populations, but also the descendants of Spanish settlers who had lived in the Southwest for centuries. The racist belief that white men rightfully should expand their institutions into the area brought the United States into conflict with Mexico. War was declared in 1846, and by the time the Treaty of Guadalupe Hidalgo was signed in 1848, ending the war, the US had gained territory that contains all or part of the states of California, Arizona, Utah, Nevada, and New Mexico. This book richly explores this fascinating part of history.