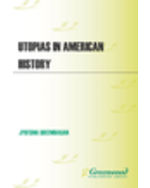 Some would argue America is a nation founded on the principle of individualism -- a capitalist society where people acting in their own interest benefit both themselves and the country as well. But the history of America also includes a surprisingly strong and continuous presence of communal societies, aiming to enrich lives through cooperation instead of competition.

With this volume, a fascinating, yet often overlooked, part of the American story is brought to the forefront. In Utopias in American History, independent scholar Jyotsna Sreenivasan makes the case that from the founding of the American colonies to the hippie communes of the 1960s to the cohousing movement, which started in the 1990s, the United States has the most sustained tradition of utopianism of any modern country.

Accessible yet authoritative and highly informative, Utopias in American History offers dozens of alphabetically organized entries covering all aspects of communal societies from colonial times to the present. Featured are descriptions of over 40 major utopian communities, both religious and secular. Entries are organized in terms of their histories, belief systems, leadership, economics, daily life, and the reactions they drew from mainstream society.