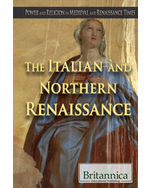 Power and Religion in Medieval and Renaissance Times, 1st Edition

From the Roman Empire to the Age of Exploration, Europe underwent a profound transformation. The Middle Ages, once thought to be a time of superstition and social oppression, are now recognized as a dynamic period that shaped Europe’s political, social, economic, and cultural structures. As Christianity expanded its influence, these secular institutions also evolved, leading to urban growth, wars between city-states, and innovations in philosophy, science, literature, and many other fields. This series traces the power struggles and religious conflicts that embroiled the continent during medieval and Renaissance times and provided the foundation for the modern conception of Europe.