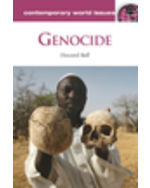 In 1948, the UN General Assembly adopted the Convention on the Prevention and Punishment of the Crime of Genocide (CPPCG), legally defining the crime of genocide for the first time. Amazingly, the United States did not ratify this international agreement until nearly 40 years later, when President Reagan finally signed the genocide convention bill. Attempts to enforce international law against genocide did not begin until the 1990s. GENOCIDE: A REFERENCE HANDBOOK examines the antecedents of the term genocide in the mid-19th century and explains the current challenges of preventing or even stopping genocide, including the nation-state system and principles of state sovereignty. The author documents how crimes of genocide have continued unchecked, and asserts that a collective commitment to humanitarian intervention is the only way to address this ongoing problem.