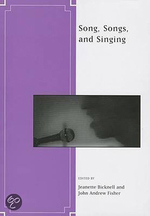 The last twenty years or so have seen a surge of interest in the philosophy of music. However there is comparatively little philosophical literature devoted specifically to songs, singing and vocal music in general. This new collection of essays on the philosophical aspects of song and singing includes articles on the relationship between words and music in songs, the ontology of songs and recordings, meaning in songs, the metaphysics of vocal music in opera and the movies, and the ethical challenges raised in song performance. The essays discuss a large range of examples, including rock, lieder, jazz songs, blues, doo wop, and rap.

Front Cover.
1: Introduction: Making a Space for Song.
2: The Dialogue between Words and Music in the Composition and Comprehension of Song.
3: Meanings of Songs and Meanings of Song Performances.
4: Jazz Vocal Interpretation: A Philosophical Analysis.
5: Ephemeral Media, Ephemeral Works, and Sonny Boy Williamson's “Little Village”.
6: Doing It Their Way: Rock Covers, Genre, and Appreciation.
7: A Case for Song: Against an (Exclusively) Recording-Centered Ontology of Rock.
8: Realistic Song in the Movies.
9: Opera Singing and Fictional Truth.
10: Can American Popular Vocal Music Escape the Legacy of Blackface Minstrelsy?.
11: Nonsense in Public Places: Songs of Black Vocal Rhythm and Blues or Doo-Wop.
12: “Strange Fruit”: Music between Violence and Death.
13: The Ethics of Singing Along: The Case of “Mind of a Lunatic”.
Contributors.