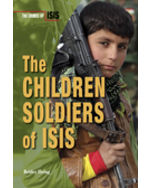 The Crimes of ISIS: The Children Soldiers of ISIS, 1st Edition

While most children learn reading and math, the child soldiers of ISIS spend their days on weapons training and religious education. Called The Cubs of the Caliphate, these children are weapons of the Islamic State. Some are the children of Islamic State fighters, while others are kidnapped and forced to fight for ISIS if they want to live. While the world has been outraged by footage of these young fighters killing hostages and waging war, there's more to their story. This book looks at how ISIS is selecting and grooming the next generation of jihadists and what can be done to prevent a generation of lost children.