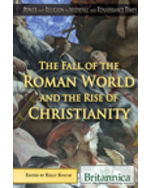 Power and Religion in Medieval and Renaissance Times: The Fall of the Roman World and the Rise of Christianity, 1st Edition

Although once regarded as a time of uninterrupted ignorance, superstition, and social oppression, the Middle Ages are now understood as a dynamic period during which the idea of Europe as a distinct cultural unit emerged. This title dives into late antiquity and the early Middle Ages, a time when political, social, economic, and cultural structures were profoundly reorganized. As Roman imperial traditions gave way to those of the Germanic peoples who established kingdoms in the former Western Empire, new forms of political leadership were introduced, and the population of Europe was gradually Christianized.