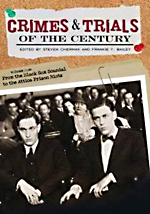 Crimes and Trials of the Century, 1st Edition

The public seems fascinated by crime. News and popular media sources provide a steady diet of stories, footage, and photographs about the misfortunes of others in order to satisfy this appetite. Murder, rape, terrorism, gang-related activities, and other violent crimes are staples. Various crime events are presented in the news every day, but most of what is covered is quickly forgotten. In contrast, some crimes left a lasting impression on the American psyche. Some examples include the assassination of President John F. Kennedy, the bombing of the Murrah building in Oklahoma City, and the September 11th attacks. These events, and other significant cases, are immediately or on reflection talked about as crimes of the century. They earn this title not only because they generate enormous publicity, but because of their impact on American culture: they help define historical eras, influence public opinion about crime, change legal process, and focus concern about important social issues. They seep into many other shared aspects of social life: public conversation, fiction and nonfiction, songs, poems, films, and folk tales.

This set focuses on the many crimes of the century of the last 100 years. In vivid detail, each crime is laid out, the investigation is discussed, the media reaction is described, the trial (if there was one) is narrated, the resolution is explored, and the significance of the case in terms of its social, political, popular, and legal relevance is examined. Illustrations and sidebars are scattered throughout to enliven the text; print and electronic resources for further reading and research are offered for those wishing to dig deeper. Cases include the Scopes Monkey trial, Ted Bundy, Timothy McVeigh, O.J. Simpson, Leopold and Loeb, Fatty Arbuckle, Al Capone, JonBenet Ramsey, the Lacy Peterson murder, Abu Ghraib, Columbine and more.

Front Cover.
Half Title Page.
Title Page.
Copyright Page.
Contents.
Preface to the Set.
Introduction to Volume 1.
1: The Black Sox Scandal: More Than a Story of “Eight Men Out”.
2: The Sacco-Vanzetti Trial: Judging Anarchy.
3: Alphonse Capone: The Man Behind the Legend.
4: The Tragedy of Arbuckle, “Prince of Whales”.
5: The Incomprehensible Crime of Leopold and Loeb: “Just an Experiment”.
6: Fundamental Divides: The Trial of John Scopes.
7: Bonnie and Clyde: A “Mad, Dizzy Whirl”.
8: The Scottsboro Boys Trials: Black Men as “Racial Scapegoats”.
9: The Lindbergh Baby Murder Case: A Crime of the Century.
10: Alger Hiss: No Certain Verdict.
11: Worse Than Murder: The Rosenberg-Sobell Atom Spy Affair.
12: The Sam Sheppard Case: Do Three Trials Equal Justice?.
13: The Emmett Till Murder: The Civil Rights Movement Begins.
14: Mississippi Burning.
15: The Bombing of the Sixteenth Street Baptist Church: The Turning Point of the Civil Rights Movement.
16: Charles Manson and the Tate-LaBianca Murders: A Family Portrait.
17: The Ageless Anguish of Kent State.
18: The Attica Trials: A Thirty-Year Pursuit of Justice.