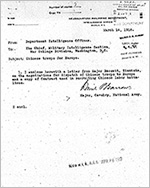 Political, Economic, and Military Conditions in China: Reports and Correspondence of the U.S. Military Intelligence Division, 1918–1941

This collection represents the first-ever digital publication of the intelligence reports of the U.S. military attaches and their staffs in China during the period 1918–1941 and provides valuable documentation on the many key events in 20th-century China: the bitter struggle--starting in 1927 and dominating Chinese politics for more than 20 years—between China’s Kuomintang forces and the Communists; Japanese occupation of Manchuria; Chiang’s military campaigns against the Communists, highlighted by Mao Tse-tung’s “Long March” with the Red Army; and the Second Sino-Japanese War, commencing with Japan’s invasion of China in 1937 and merging into World War II in 1941. Few, if any, English-language sources can match these U.S. military intelligence reports for comprehensive documentation of developments and events in China during the period between World War I and World War II. By 1918, the intelligence-gathering apparatus of the U.S. military had emerged as a distinct, wide-ranging, and sophisticated arm of the nation’s diplomatic and defense organization. Soon realizing that the intelligence needs of America transcended knowledge of purely military affairs, U.S. military attaches in China reported on a wide range of topics, including the internal politics, socioeconomic conditions, and foreign affairs of China.