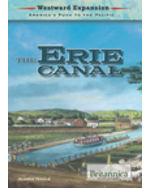 Following the American Revolutionary War, distance and difficult terrain made the western frontier of the newly formed United States seem like a world apart from the thirteen Atlantic-seaboard colonies. To better preserve the union, as well as advance the country's fledgling independent economy, a group of statesmen proposed building a canal that would connect these unified yet disparate locations. At first considered a "folly," the Erie Canal wound up achieving those lofty goals and more. Readers uncover the reasons and strategies behind the building of the canal, and the ways in which this crucial waterway facilitated U.S. westward expansion.