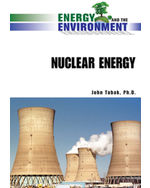 Commercial nuclear power has long been one of the most controversial of all power-generating technologies, but the debate has not always been particularly informed. In order to understand the contribution that nuclear power makes today and its potential for the future, one must appreciate the various branches of physics, engineering, mathematics, economics, and the environment, as well as the way that power is supplied to the grid. It also helps to apply the same ideas and standards to the evaluation of competing technologies. Neither an endorsement nor a condemnation of nuclear power, Nuclear Energy provides objective information that is accessible - assuming only a modest knowledge of high school algebra on the part of the reader - and broad in scope. This new title discusses the physics and technology of energy production, reactor design, nuclear safety, the relationship between commercial nuclear power and nuclear proliferation, and attempts made by the United States to resolve the problem of nuclear waste disposal. It concludes by contrasting the nuclear policies of Germany, the United States, and France. Harold Denton, former Director of the Office of Nuclear Reactor Regulation at the U.S. Nuclear Regulatory Commission, is questioned about the commercial nuclear industry in the United States.