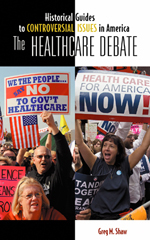 This work provides meaningful context for thinking about one of the most controversial public policy issues the United States faces. It traces the evolution of the argument over the government's role in healthcare financing and delivery since the early 1800s, with an emphasis on the major reform efforts since the mid-20th century. Following the complex dynamics of public health policy across U.S. history, it brings together a wide range of voices on the subject, presidents, policymakers, reformers, lobbyists, and everyday citizens. Each of its eight chronologically organized chapters focuses on the battle over government involvement in healthcare in a specific era, drawing on historic documents and the latest retrospective research.

Front Cover.
Half Title Page.
Other Frontmatter.
Title Page.
Copyright Page.
Dedication.
Contents.
List of Tables and Figures.
Preface.
Introduction: Why No National Health Insurance in America?.
1: Setting the Stage: Uncertainty in Early Medicine and Government Roles.
2: Not Quite Catching the Wave: Health Care and the Early-Twentieth-Century Social Insurance Movement.
3: Policy Growth without a Plan or Philosophy: The 1950s and Early 1960s.
4: Enacting Medicare and Medicaid.
5: Deepening Trouble with the Healthcare System.
6: The Rise and Fall of the Clinton Plan.
7: One Piece at a Time?.
8: Struggling toward a Healthcare System.
Timeline of Significant Events in American Health Care.
Annotated List of Further Readings: Selected Topics.
Bibliography.
Index.
About the Author.