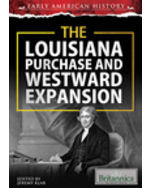 The Louisiana Purchase stands out in American history for a number of reasons. It was the largest acquisition of land in United States' history. It was also the first time a president obtained new territory by purchase. But, perhaps most important, it fueled the American drive for westward expansion -- a powerful force in U.S. culture and politics for the remainder of the 19th century. This authoritative title presents that history in depth, contextualizing the Louisiana Purchase and examining how it affected the early development of America, bringing this episode of American history to life for a new generation of readers.