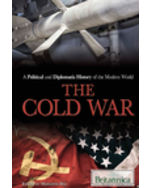 A Political and Diplomatic History of the Modern World: The Cold War, 1st Edition

Immediately following World War II, former allies the United States and the Soviet Union began an open yet restricted rivalry that became known as the Cold War and played out around the world until the Soviet Unions collapse in 1991. Many conflicts, such as the Chinese Civil War, the Korean War, the Vietnam War, and the Arab-Israeli wars, acted as proxy wars for the U.S.-Soviet competition. Other major issues explored in this examination of the Cold War include Europe's Iron Curtain, the nuclear arms race, decolonization in Africa, and the spread of communism into Latin America and Southeast Asia.