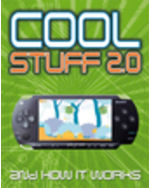 Following on the success Cool Stuff and How it Works, this spectacular book shows and explains, in a brilliantly visual and easy-to-understand way, exactly how the technology that shapes our world works. Taking the reader on an eye-opening journey from the engine of a hydrogen-fuelled car, into the virtual world of Second Life, and up the earthquake-proofed structure of the world’s tallest office building, learn about the science behind every machine and gadget, and find out when and how things were invented—from mobile phones and games consoles to smart cards and space planes. Chris Woodford graduated from Cambridge University with a degree in Natural Sciences. For several years he worked as an information designer for IBM and then made a career change to publishing where he became an editor on specialist science and technology titles. Dr. Jon Woodcock graduated from Oxford University with a degree in physics before moving to the University of London where he was awarded a PhD for his work in astrophysics. He has worked in research and development for various hi- tech companies and now consults and writes on science and technology.