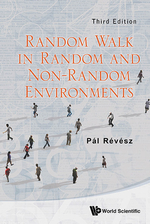 The simplest mathematical model of the Brownian motion of physics is the simple, symmetric random walk. This book collects and compares current results - mostly strong theorems which describe the properties of a random walk. The modern problems of the limit theorems of probability theory are treated in the simple case of coin tossing. Taking advantage of this simplicity, the reader is familiarized with limit theorems (especially strong ones) without the burden of technical tools and difficulties. An easy way of considering the Wiener process is also given, through the study of the random walk.Since the first and second editions were published in 1990 and 2005, a number of new results have appeared in the literature. The first two editions contained many unsolved problems and conjectures which have since been settled; this third, revised and enlarged edition includes those new results. In this edition, a completely new part is included concerning Simple Random Walks on Graphs. Properties of random walks on several concrete graphs have been studied in the last decade. Some of the obtained results are also presented.

Front Cover.
Half Title Page.
Title Page.
Copyright Page.
Preface to the First Edition.
Preface to the Second Edition.
Preface to the Third Edition.
Contents.
Introduction.
1: Simple Symmetric Random Walk in ℤ1.
2: Notations and Abbreviations.
3: Introduction of Part I.
4: Distributions.
5: Recurrence and the Zero-One Law.
6: From the Strong Law of Large Numbers to the Law of Iterated Logarithm.
7: Lévy Classes.
8: Wiener Process and Invariance Principle.
9: Increments.
10: Strassen Type Theorems.
11: Distribution of the Local Time.
12: Local Time and Invariance Principle.
13: Strong Theorems of the Local Time.
14: Excursions.
15: Frequently and Rarely Visited Sites.
16: An Embedding Theorem.
17: A Few Furtlier Results.
18: Summary of Part I.
19: Simple Symmetric Random Walk in ℤd.
20: Notations.
21: The Recurrence Theorem.
22: Wiener Process and Invariance Principle.
23: The Law of Iterated Logarithm.
24: Local Time.
25: The Range.
26: Heavy Points and Heavy Balls.
27: Crossing and Self-crossing.
28: Large Covered Balls.
29: Long Excursions.
30: Speed of Escape.
31: A Few Further Problems.
32: Random Walk in Random Environment.
33: Notations.
34: Introduction of Part III.
35: In the First Six Days.
36: After the Sixth Day.
37: What Can a Physicist Say About the Local Time ξ(0, n)?.
38: On the Favourite Value of the RWIRE.
39: A Few Further Problems.
40: Random Walks in Graphs.
41: Introduction of Part IV.
42: Random Walk in Comb.
43: Random Walk in a Comb and in a Brush with Crossings.
44: Random Walk on a Spider.
45: Random Walk in Half-Plane-Half-Comb.
References.
Author Index.
Subject Index.