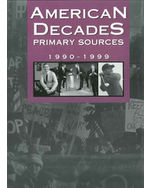 Closing out the twentieth century, the 1990s showed no signs that the United States would enter quietly into the next millennium. Under the George H.W. Bush administration, U.S. troops fought in the first Gulf War, liberating Kuwait from Iraq. David Koresh's cult compound in Waco, Texas, was raided by federal agents. President Bill Clinton was impeached by Congress, but remained in office to complete his second term. NASA's Pathfinder sent images of Mars back to Earth. The curious could view the images on the rapidly expanding and increasingly accessible Internet. While new technology transformed much of how people communicated and worked, some business-place practices are universal. These were humorously represented in the new Dilbert comic strip.

"This is a treasure trove covering everything from world events, education, social trends, and media to the arts, business, science, and law and justice. And, fortunatley, a sensible organization makes the information readily accessible...This informative study will be a useful addition to the reference collections of high schools and universites." -- ARBA (2002)