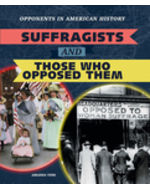 Opponents in American History: Suffragists and Those Who Opposed Them, 1st Edition

Although Thomas Jefferson wrote all men are created equal<\Q> in the Declaration of Independence in 1776, women wouldn't be allowed to vote in the United States until many years later. Suffragists, the women who fought for the vote, faced great opposition from several forces, even other groups of women. In 1848, Lucretia Mott, Elizabeth Cady Stanton, and numerous other pioneering suffragists met in Seneca Falls, New York, for the first women's rights convention held in the United States. It wasn't until 1920, however, that all U.S. women gained the right to vote through the 19th Amendment. Readers will learn about the American women's suffrage movement from its earliest years and into the 20th century.