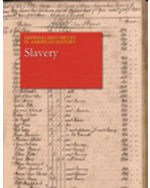 This title Slavery delves into the extremely long and violent history of the titular subject. These volumes discuss slavery in multiple contexts, from ancient times to the slave trade during colonial America, and from the abolitionist movement to issues of slavery in the modern era. Slavery was not universally endorsed, but it became a part of the economic fabric of the nation. Riots and rebellions alarmed owners and strengthened the resolve of those who worked toward the abolition of slavery and the emancipation of the men, women, and children deemed property and valued as only three-fifths of a human. It took a civil war to achieve the goal of freedom for all, and decades of work that continues to this day, to gain and defend it.

Front Cover.
Half Title Page.
Title Page.
Copyright Page.
Contents.
Publisher’s Note.
Editor’s Introduction.
Contributors.
Other Frontmatter.
1: Early Debates and Considerations.
2: Some Considerations on the Keeping of Negroes.
3: Defense of Slavery in Virginia.
4: Petition of Hall and Other African Americans to the General Court.
5: An Act for the Gradual Abolition of Slavery.
6: Debate in the Constitutional Convention over the Slave Trade.
7: Slavery Clauses in the U.S. Constitution.
8: An Address to Those Who Keep Slaves, and Approve the Practice.
9: Letters Exchanged between Benjamin Banneker and Thomas Jefferson.
10: Haitian Declaration of Independence.
11: An Oration on the Abolition of the Slave Trade.
12: A Thanksgiving Sermon on Abolition of the Slave Trade.
13: Antebellum Activities.
14: The Missouri Compromise.
15: Walker’s Appeal.
16: Address to the Free People of Colour of these United States.
17: Prospectus for The Liberator.
18: Calhoun on the Reception of Abolition Petitions.
19: The Colored American.
20: Colored Churches in This City.
21: United States v. Amistad.
22: The South in Danger.
23: Fugitive Slave Act of 1793.
24: Speeches for and Against the Compromise of 1850.
25: What to the Slave Is the Fourth of July?.
26: Kansas-Nebraska Act.
27: Speech Against the Kansas-Nebraska Act.
28: The Dred Scott Decision.
29: Lincoln’s House Divided Speech.
30: The Lincoln-Douglas Debates.
31: The Trial of John Brown.
32: Speech to the Court that Sentenced Him to Death.
33: Cooper Union Address.
34: Frederick Douglass on Slavery and the Constitution.