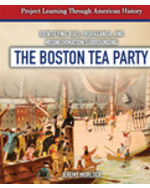 The Boston Tea Party was an inflammatory episode that helped spark the American Revolutionary War. The events leading up to the incident, and those that followed, were colored by bias, propaganda, and the spread of misinformation. Readers will study the Boston Tea Party through the critical lens of this book. Readers will be asked to question how the opinions of the time prompted the Tea Party itself and how the incident was interpreted in later years.