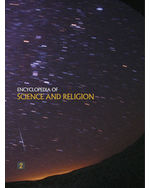 The Encyclopedia of Science and Religion addresses all aspects of the dialogue between the sciences and the world's religions. The multidisciplinary 2-vol. set reaches far into the humanities as well as into the physical sciences and technology. In addition, controversial issues such as human cloning and stem cell research are examined along with more traditional questions such as the origins of life, the nature of sin, and the philosophy of science and religion.

"Thousands of books have been written about the relationship between science and religion, but few can be characterized as reference resources. This two-volume set helps fill that niche with more than 400 scholarly articles written by experts from around the world. Intended for students and researchers, it provides a glimpse into the effects of major scientific discoveries on world religions. The multidisciplinary scope extends coverage into the social sciences and humanities, which results in a wide spectrum of entries, such as Buddhism, Economics, Evil and Suffering, Language, Reproductive Technology, and String Theory. The articles range from 100-word definitions of key terms to 4000-word essays on broader topics containing background information and discussions of the religious and scientific perspectives of the issues... The Encyclopedia includes more contemporary issues, Eastern traditions, and disciplines outside of science and religion... Recommended for academic and larger public libraries." -- Library Journal (August 2003)

"Although some might disagree, science and religion are among the dominant cultural forces of our time. The conflict between them has lasted for thousands of years, but has intensified as new scientific discoveries challenge the intellectual and social dimensions of our world. Theologian Ian Barbour believes the conflict has resolved itself into four camps: conflict, dialogue, independence, and integration. The editors of this work think dialogue is the most useful approach and intend to make available information about the issues, interests, and constituencies contending in current dialogues. The set consists of over 400 signed articles by eminent scholars in science and religion on topics ranging from human and physical sciences through technology, theology, and religious thought. Each article first defines a scientific or religious topic and some recent advances in the field, then discusses the implications these advances may have for either science or religion. This is followed by position sttemetns by partisans to the dispute over the topic, an unbiased assessment of where the dialogue currently stands, and an excellent, up-to-date bibliography. A synoptic outline, annotated general bibliography, and an extensive index tie everything together. There is much of value here for general readers, scholars, theologians, and scientists. May the dialogue continue. Summing Up: Highly recommended. General and academic readers." -- Choice (November 2003)

"...a great reference resource that addresses a wide variety of topics in religion, science, and the intersection between the two...entries are written for nonprofessionals in both religion and science, and are balanced and without obvious bias...very useful and is recommended for academic and public libraries."--ARBA (2004)

"This encyclopedia, intended for 'a wide readership from high-school students to independent researchers and academics,' deals with all aspects of the conflict and dialogue between science and religion. The list of scholars who have contributed is impressive. The editorial point of view is that the formal consideration of the relationship between science and religion has become a new academic field of study. The troublesome potential of new technologies has brought questions into the public arena as well. The historical and contemporary relationships between the realm of science and the major religious groups Judaism, Islam, Christian traditions, Chinese religions, Buddhism, and Hinduism are treated individually. Major scientific and academic fields are examined in the context of the encyclopedia¿s focus. Close to 70 articles on the physical sciences, for example, include entries on all the major arenas of the field: chemistry, particle physics, quantum physics, etc., each providing an overview of early research, contemporary developments and lessons, or applications to religious thought...The comprehensive, global treatment of the historical and contemporary tensions and interplay between our sacred and secular knowledge make this an excellent addition to academic and large public libraries." -- Booklist (October 2003)