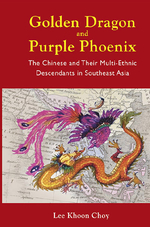 Golden Dragon And Purple Phoenix: The Chinese And Their Multi-Ethnic Descendants In Southeast Asia, 1st Edition

Many books have been written about the Chinese in Southeast Asia, but very few, if any, are written specifically about the multi-ethnic descendants of Chinese immigrants. Golden Dragon and Purple Phoenix is not about the diaspora per se of Chinese in Southeast Asia but about the impact of intermarriage between Chinese immigrants and the natives, that is, the intermingling of blood and the offspring from such unions - the influence they wielded on the society and environment they chose to live in. It is also about how they rose to high positions and their contributions to their societies. Some rose to become kings or king makers, others to become presidents, prime ministers, senior ministers, prominent businessmen, or religious leaders. Some openly declared their ancestry and are proud of their Chinese DNA, while others have forgotten their heritage and in their fervour to prove their allegiance to their country of birth, dissociate themselves, assertively through violence, indirectly through economic sanctions and various other means. In short, the multi-ethnic Chinese descendants form a unique community with unique cultural genes of its own, and these fresh and rarely-known stories about them in this book will be a good resource for historical researchers as well as fascinating reading materials for readers in general.

Front Cover.
Half Title Page.
Title Page.
Copyright Page.
Foreword.
Preface.
Acknowledgements.
Contents.
1: The Lokjins in Thailand.
2: The Mestizos of the Philippines.
3: The Mingling of Chinese and Javanese Blood — The Peranakan.
4: The Tayoke Kabya and the Kokangese in Myanmar.
5: The Konkat-Cen in Cambodia.
6: The Minh Huong of Vietnam.
7: Sino-Laos and the Hmong in Laos.
8: Baba and Nyonya in Malaysia.
9: Westernised Singaporeans.
10: Brunei: Land of the Smiling People.
Index.