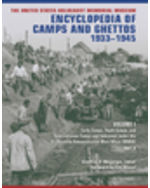 Early camps, youth camps, and concentration camps and subcamps under the SS-Business Administration Main Office (WVHA) Describes the universe of camps and ghettos, some 20,000 in all, that the Nazis and their allies operated, from Norway to North Africa and from France to Russia. This volume covers three groups of camps: the early camps that the Nazis established in the first year of Hitler's rule, the major SS concentration camps with their constellations of subcamps, and the special camps for Polish and German children and adolescents.