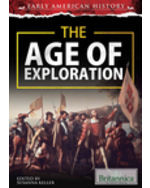 The Age of Exploration, 1st Edition

This engaging title tells the story of the explorers who became the first Europeans to visit the lands that would later become the United States of America. Readers will learn about the Spanish explorers of the Southwest and the Gulf Coast, the English and Dutch explorers of the Atlantic Coast, and the French explorers of the St. Lawrence River, the Great Lakes, and the Mississippi River. They'll discover what the goals and motivations behind each expedition were, which native people the explorers encountered, and what sorts of obstacles had to be overcome for each expedition to succeed. This book provides a fascinating account of a formational period in American history.