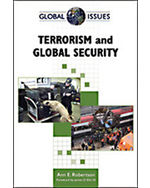 For most Americans, the terrorist attacks of September 11, 2001, are a watershed event, a turning point in how Americans think about their place in the world. Before 9/11, the United States suffered the occasional attack on its citizens abroad, but the homeland remained secure, and public safety focused on ordinary dangers such as crime, fire, flood, and influenza. After 9/11, new fears intruded on daily life, and Americans were now forced to face a clever enemy who could seemingly attack at any time, at any place. Just as earlier generations remember where they were when they learned of John F. Kennedy's assassination or the explosion of the Challenger space shuttle, 9/11 marks the moment American adolescents became aware of international events as well as the broader outlines of global security issues. The subsequent war on terrorism also dramatically changed the international landscape.

Accurate and balanced, Terrorism and Global Security provides key information on the definition, causes, and goals of terrorism; the history of terrorism; the perpetrators and their backgrounds; counterterrorism; and the issues of balancing security and liberty. Separate case studies focus on the United States as well as the United Kingdom, Germany, Japan, Peru, and Colombia, examining how each has been affected by terrorism and comparing and contrasting the measures taken in response.