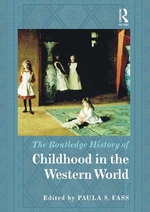 The Routledge History of Childhood in the Western World, 1st Edition

The Routledge History of Childhood in the Western World provides an important overview of the main themes surrounding the history of childhood in the West from antiquity to the present day. By broadly incorporating the research in the field of Childhood Studies, the book explores the major advances that have taken place in the past few decades in this crucial field.

Front Cover.
Other Frontmatter.
Other Frontmatter.
Title Page.
Copyright Page.
Dedication.
Contents.
Figures.
Contributors.
Acknowledgements.
1: Is there a Story in the History of Childhood?.
2: Childhood in the Ancient World, the Middle Ages, and Early Modern Europe.
3: Images of Childhood in Classical Antiquity.
4: Children in Judaism and Christianity.
5: Childhood in Medieval and Early Modern Times.
6: Childhood and the Enlightenment.
7: Creating Childhoods in the Western World Since 1500.
8: Parent–Child Relations in Western Europe and North America, 1500–Present.
9: Children's Work in Countryside and City.
10: Children and War.
11: Childhood Emotions in Modern Western History.
12: Children and the State.
13: The Vexed History of Children and Sex.
14: Age, Schooling, and Development.
15: Making Adolescence More or Less Modern.
16: The Physical Spaces of Childhood.
17: Play, Games, and Toys.
18: Children as Consumers.
19: Picturing Childhood in the Modern West.
20: Children's Literature.
21: Special Children at Special Times or Places.
22: Children in North American Slavery.
23: Mixedrace Children in the American West.
24: Infanticide, Abortion, Children, and Childhood in Sweden, 1000–1980.
25: Social Welfare in the Western World and the Rights of Children.
26: Children as Vagrants, Vagabonds, and Thieves in Nineteenth-Century America.
27: Children in Scouting and other Organizations.
28: New Opportunities for Children in the Great Depression in the United States.
29: Childhood and Youth in Nazi Germany.
30: International Child Saving.
31: Latin American Childhoods and the Concept of Modernity.
Index.