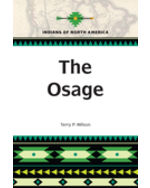 The Osage, part of the Indians of North America series, presents a fascinating portrayal of the history and culture of these native people. Living in the fertile Mississippi River Valley, the Osage Indians first encountered European explorers in the 18th century. Eventually forced to live on a reservation, they resisted U.S. government efforts to "civilize" them. After oil was discovered on their reservation, they became known as the "richest group of people in the world" and continue to thrive today.