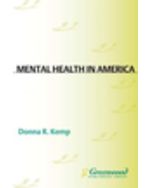 Culturally deviant. Possessed by the devil. Sick. Genetically disturbed. Biochemically imbalanced. Throughout American history, attitudes toward mental illness have vacillated from sympathy and support to disdain and neglect. Numerous Americans from all walks of life are diagnosed with a mental health condition each year. Why are the attention and resources allotted to this policy area disproportionately low?

Mental Health in America: A Reference Handbook examines the evolution of mental health policy in America from the almshouses of colonial times and the dawn of psychoanalysis in the early 1900s to the community mental health revolution in the 1960s and the insurance problems plaguing the field today.

Addressing such conditions as Alzheimer's disease, schizophrenia, anxiety, dementia, bipolar disorder, and depression, this work explores the changing definitions and explanations of mental illness and provides detailed analyses of treatments and their effects, including electroshock therapy, lobotomy, and psychotropic drugs. Readers will meet such key players as Horace Mann, who called for the insane to be made wards of the state, and assemblywoman Helen Thomson, an involuntary-treatment advocate referred to by her opponents as "Nurse Ratchett."