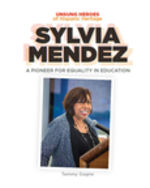 
Sylvia Mendez: A Pioneer for Equality in Education, 1st Edition

Sylvia Mendez was just like any other third grader in 1946. She liked to learn. She enjoyed recess. But her school was in terrible shape. She wanted to go to the 17th Street School. This was the school that the white children in her city of Westminster attended. But it had a whites-only policy that kept Mexican American children like Sylvia out. Sylvia and her family did not think this policy was fair, so they decided to sue the school district. Their willingness to stand up for equality in education paved the way for all California schools to become desegregated. The historic court case even played a role in the more famous Brown v. Board of Education, which made school segregation illegal in all 50 U.S. states. There's even more interesting information about this pioneer in education inside.