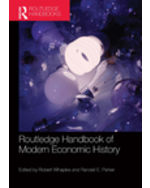 The Routledge Handbook of Modern Economic History aims to introduce readers to important approaches and findings of economic historians who study the modern world. Its short chapters reflect the most up-to-date research and are written by well-known economic historians who are authorities on their subjects. Modern economic history blends two approaches – Cliometrics (which focuses on measuring economic variables and explicitly testing theories about the historical performance and development of the economy) and the New Institutional Economics (which focuses on how social, cultural, legal and organizational norms and rules shape economic outcomes and their evolution). Part 1 of the Handbook introduces these approaches and other important methodological issues for economic history. The most fundamental shift in the economic history of the world began about two and a half centuries ago when eons of slow economic change and faltering economic growth gave way to sustained, rapid economic expansion. Part 2 examines this theme and the primary forces economic historians have linked to economic growth, stagnation and fluctuations – including technological change, entrepreneurship, competition, the biological environment, war, financial panics and business cycles. Part 3 examines the evolution of broad sectors that typify a modern economy including agriculture, banking, transportation, health care, housing, and entertainment. It begins by examining an equally important 'sector' of the economy which scholars have increasingly analyzed using economic tools – religion. Part 4 focuses on the work force and human outcomes including inequality, labor markets, unions, education, immigration, slavery, urbanization, and the evolving economic roles of women and African-Americans. The text will be of great value to those taking economic history courses as well as a reference book useful to professional practitioners, policy makers and the public.