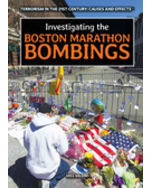 In 2013, over twenty thousand people came to participate in the Boston Marathon, held every year on Patriots’ Day. Thousands gathered at the finish line to watch the runners complete the twenty-six mile run. Instead, they became victims and witnesses of a devastating attack that left 3 dead, 260 wounded, and shut down the entire city. Students will learn about the history of the marathon and the bombing, the response to the attack, the manhunt for the bombers, and the impact of the bombing on American society. A glossary, timeline, and further reading lists are also included to aid students.