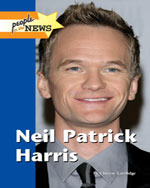 Former teen idol Neil Patrick Harris can be described as something of a Renaissance man -- someone who is intelligent and accomplished in a variety of areas, and can act, sing, dance, play music, and perform live. Harris's career has spanned more than twenty years. During that time, he has gone from playing the baby-faced do-gooder Doogie Howser in the late 1980s and early 1990s to playing the phenomenal cad Barney Stinson today. He has found enormous popularity in both of these roles. Neil Patrick Harris is widely admired not just for his many talents, but also for his openness and honesty about his own life and his willingness to be open and frank about his homosexuality. This has made him a role model to others who have struggled with their own sexual identity. Above all, Harris's ability to integrate his identity and skills into his many projects has made him one of Hollywood's most versatile stars.