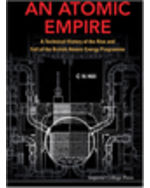 An Atomic Empire: A Technical History Of The Rise And Fall Of The British Atomic Energy Programme, 1st Edition

Britain was the first country to exploit atomic energy on a large scale, and at its peak in the mid-1960s, it had generated more electricity from nuclear power than the rest of the world combined.The civil atomic energy programme grew out of the military programme which produced plutonium for atomic weapons. In 1956, Calder Hall power station was opened by the Queen. The very next year, one of the early Windscale reactors caught fire and the worlds first major nuclear accident occurred.The civil programme ran into further difficulty in the mid-1960s and as a consequence of procrastination in the decision-making process, the programme lost momentum and effectively died. No nuclear power stations have been built since Sizewell B in the late 1980s.This book presents a study of Government papers that have recently become available in the public domain. For the first time in history, the research reactor programme is presented in detail, along with a study of the decision-making by the Government, the Atomic Energy Authority (AEA), and the Central Electricity Board (CEGB). This book is aimed at both specialists in nuclear power and the interested public as a technical history on the development and ultimate failure of the British atomic energy programme.