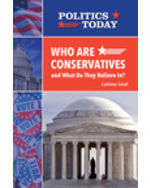 Politics Today: Who Are Conservatives and What Do They Believe In?, 1st Edition

Since the modern conservative movement began nearly a century ago, conservatives have made up a large segment of the American population. Readers will trace conservatism from the Great Depression of the 1930s through the modern day under the Trump administration. Conservatism experienced a unifying shift under President Ronald Reagan in the early 1980s and has been thrust into the forefront in the twenty-first century, whereas it had been more of a quiet majority for many years before. Readers will follow that journey and learn more about what it means to be a fiscal conservative or a social conservative, how the ideology of conservatism differs from specific political parties, and how the current political parties break down into conservatives and liberals.