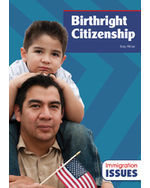 Birthright citizenship has become an integral part of the larger immigration debate because it is perceived by some as a policy ripe for abuse, as well as a potential threat to American society and culture. The origins of American birthright citizenship and the 14th Amendment are explored, along with the debate about the role it plays in illegal immigration, the phenomenon of birth tourism, and the controversy over maintaining or restricting current policy.