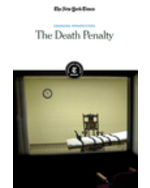 Despite human rights organizations' and the United Nations' calls to end the death penalty, the United States continues to use it, placing it in an unusual grouping with China, Iran, and Saudi Arabia, among others. Yet, a 2018 Pew Poll reflected that most Americans still support capital punishment. This Times anthology includes over a century of perspectives on the subject, covering the advent of the electric chair and lethal injection, Supreme Court decisions on capital punishment's constitutionality, and today's renewed challenges to the death penalty in light of racial disparities in sentencing. Media literacy questions and terms will challenge readers to further analyze reporting styles, devices, and the controversial subject of the death penalty.