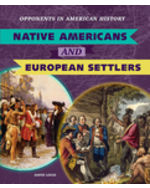 The United States of America was born of cooperation and conflict. On one side were the Native Americans, represented by dozens of different tribes from coast to coast. On the other were the European settlers, who flocked to the New World seeking freedom or fortune. What began as a sometimes friendly and cooperative relationship soon led to bitter and bloody conflicts as the young and fragile nation sought its identity. This book explores the complex history and the turbulent relations between native people and the new settlers in North America.