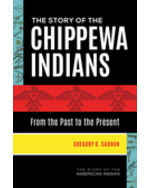 The Story of the Chippewa Indians: From the Past to the Present, 1st Edition

Unlike previous works that focus on the relationships of the Chippewa with the colonial governments of France, Great Britain, and the United States, this volume offers a historical account of the Chippewa with the tribe at its center. The volume covers Chippewa history chronologically from about 10,000 BC to the present and is geographically comprehensive, detailing Chippewa history as it occurred in both Canada and the United States, from the Great Lakes to Montana to adjacent Canadian provinces. Written by a Chippewa scholar, the book synthesizes key scholarly contributions to Chippewa studies through the author's own interpretive framework and tells the history of the Chippewa as a story that encompasses the culture's traditions and continued tenacity. It is organized into chronological chapters that include sidebars and highlight notable figures for ease of reference, and a timeline and bibliography allow readers to identify causal relationships among key events and provide suggestions for further research.