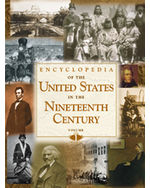 Encyclopedia of the United States in the Nineteenth Century, 1st Edition

While other resources focus on different aspects of this century, such as the Civil War or immigration, this is the first truly comprehensive treatment to cover all aspects of 19th century history: population, politics and government, economy and work, society and culture, religion, social problems and reform, everyday life, and foreign policy are explored in more than 600 A-to-Z articles. Complete with more than 400 illustrations and maps, this set includes an exhaustive year-by-year chronology, original documents, tables and a complete index.

"This work serves as a valuable introduction to the complexity and significance of this pivotal period...It offers 600 fascinating articles, written by scholars, with bibliographic references, numerous useful maps and illustrations, a day-by-day chronology, and an extensive index...Its currentness, scholarship, and inclusion of topics covered in National Standards for US History make this work a welcome addition to the reference sections of larger public, high school, and academic libraries, even those already owning the less specific Encyclopedia of American History (HarperCollins, 1996)." -- Library Journal (April 15, 2001)

"This set, covering the nineteenth century in U.S. history, is terrific. ... A spot check of the variety of entries by historians and scholars indicates that the history is sound and the entries quite complete as encyclopedic articles go. The classics, both old and new, are represented in the bibliographies, and the contributors are indeed notable in their field. This work is highly recommended for schools, public libraries, and colleges. It would be great for home use as well, although the $325 price tag might preclude that." -- ARBA (2002)

"The Encyclopedia of the United States in the Nineteenth Century takes its place between the Encyclopedia of the North American Colonies and the Encyclopedia of the United States in the Twentieth Century in a series of reference works on U.S. History from Scribner. While the new set has a different organizational format, it offers quality and coverage comparable to that in the companion works...Intended as both a reference book and an introduction to the vital issues of the nineteenth century, this resource is appropriate for students and scholars alike and is recommended for all libraries providing ample reference works in American history. Of note to school and public libraries, the National Standards for United States History, published by the National Center for History in the Schools, were used as a benchmark in the creation of the set to ensure coverage complementary to school textbooks."-- Booklist (May 15, 2001)

"Finkelman offers nearly 600 signed, scholarly entries on main issues and ideas of the 'century that made America.' The US in the 19th century witnessed incredible changes; these essays, some longer than 3,000 words, capture the essence of this great transformation. The encyclopedia maintains the high level of scholarship set by two earlier volumes (Encyclopedia of North American Colonies, Encyclopedia of the US in the Twentieth Century)...The scope is impressive, covering such topics as nationalism, African Americans, movies, literature, life cycle, ad midwives...A synoptic outline in the last volume uses the National Standards for US History to relate entries to particular standards; for example, students tracing the course and character of the Civil War and its effect on the US people can refer to synoptic entries on sectionalism, slavery, the Civil War, and Reconstruction. They synoptic outline used with the index allows easy access to information. Except for the absence of biographical entries, this is a superior work, suitable for undergraduate and graduate students." -- CHOICE (June 2001)

Booklist Editor's Choice"This wide-ranging resource designed for both students and specialists comes with impeccable scholarly credentials. More than 600 articles survey the central events, issues, and ideas that shaped the century that made America. The Encyclopedia; staff used the National Standards for United States History as their benchmark for deciding what to include." -- Booklist (January 2002)

"Gr 9 - UP—Providing an introduction to the central issues and questions of this period of enormous change, this outstanding resource discusses people, politics, economics, technology, and the Civil War in 599 alphabetically arranged, signed essays. Many of the lengthy entries include subentries. For example, under 'Civil War' there are separate discussions of the causes of the war, battles, black soldiers, women, the home fronts, the West, Indian Territory, consequences, and legacy. ...More than 480 black-and-white photographs, reproductions, maps, drawings, and political cartoons supplement the text. In its coverage, the set conforms to the standards published by the National Center for History in the Schools. There is a synoptic outline. Sure to be utilized by a wide range of students, this ... is a must for all libraries." -- School Library Journal (August 2001)