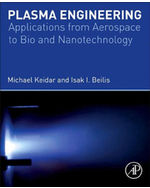 Plasma engineering applies the properties of plasmas (ionized gases) to improve processes and performance in many fields, such as materials processing and spacecraft propulsion. Plasma Engineering addresses fundamentals of physics and modeling as well as real-word applications in aerospace, nanotechnology, and bioengineering. The book reviews plasma particle collisions, waves, and instabilities and discusses diagnostic tools. The physics of different types of electrical discharges are considered, including the classical Townsend mechanism and the Paschen law. Basic approaches and theoretical methodologies for plasma modeling are described, based on the fluid description of plasma solving numerically magnetohydrodynamic (MHD) equations and the kinetic model particle techniques. Readers are introduced to the widest variety of applications in any current text. Space propulsion applications such as the Hall thruster, pulsed plasma thrusters, and microthruster are explained. Application of low-temperature plasmas in nanoscience and nanotechnology is covered, including plasma-based techniques for carbon-based nanoparticle synthesis (e.g., fundamental building blocks like single-walled carbon nanotubes and graphene). Plasma medicine is also examined. The latest original results on cold atmospheric plasma (CAP) applications in medicine are presented, with a focus on the therapeutic potential of CAP with a in selective tumor cell eradication and signaling pathway deregulation.