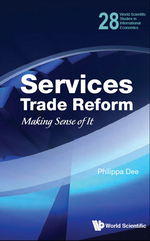 With the Doha Round of multilateral trade negotiations moribund, it is time to reconsider the future of trade negotiations as an impetus for reform. Services trade is a leading-edge behind-the-border issue, so a services perspective offers critical insights into the future of trade negotiations more generally. This book traces the authors thinking on how to make sense of services trade reform, drawing on her analytical, empirical and policy-related work on services issues from both academic and government perspectives. It covers policy reform, policy forums, and what it takes politically to achieve reform, and offers critical new insights into the future of trade negotiations.The book shows policy makers how to approach the economics and politics of services trade reform domestically, consistent with relevant special features of services trade. It shows analysts the full policy implications of those special features, including what they mean and how services reform should be treated in the future in national and international forums. In covering such broad territory, the book draws together published material that previously has been scattered across place and time, including modelling that establishes empirically the special features of services that are relevant.

Front Cover.
Half Title Page.
Other Frontmatter.
Title Page.
Copyright Page.
Preface.
Contents.
List of Tables.
List of Figures.
Abbreviations.
1: Making Sense of Services Trade Reform.
2: Model Frameworks.
3: Issues in the Application of CGE Models to Services Trade Liberalization.
4: Modelling the Policy Issues in Services Trade.
5: Model Applications.
6: Multilateral Liberalization of Services Trade.
7: Measuring the Cost of Barriers to Trade in Services.
8: Economy-wide Effects of Further Trade Reforms in Tunisia's Services Sectors.
9: The Employment Implications of Liberalizing Foreign Direct Investment in Services.
10: Policy Insights.
11: The Rise of Services Trade: Regional Initiatives and Challenges for the WTO.
12: Services: A ‘Deal-maker’ in the Doha Round?.
13: Services in PTAs: Donuts or Holes?.
14: What Behind-the-Border Reforms in Services and Investment Are Best Done through Trade Agreements?.
15: Achieving Services Trade Reform through Domestic Reform.
16: The Role of Institutions in Structural Reform.
17: Toward a Theory of Policy Efficiency.
18: Promoting Domestic Reforms through Regionalism.
References.